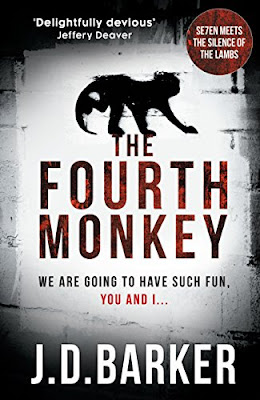 I read this book because of the hype surrounding it. Did I like it? Well, I ended up with mixed feelings.

The plot revolves around the concept of three monkeys plus one. These convey 'see no evil, hear no evil, speak no evil' and the fourth lesser known 'do no evil'. There is a serial killer who not only follows this but executes the same as well. This story is whodunit search for the serial killer by a cop.

Barker is a storyteller. The change in scenes ensures a continuity in the narration. However, I felt something amiss. There were scenes that were described in graphic details. Yet imageries kept popping in a random manner while reading those descriptions. To be honest, I neither felt I was a part of the story nor was I a mute spectator. Hence, in the end I ended up being a reader. This is my personal view. The language is understandable but yes, the book does have mature content. Notwithstanding this, the storyline per se does have the ability to become a blockbuster. There is a cliffhanger in the end and so I am hoping for an improved version of the story in part two.

There are two major characters, an antagonist and a protagonist. However, with many characters being introduced every now and then, the duo didnt have the impact they ought to have had on me. I mean, I didn't end up thinking about a character after finishing the book.

To sum up, by the time I finished reading, the ending did disappoint me a bit. Maybe, if it had been reworded a bit, the effect would have been different. The story in toto is really good and very likeable. The plot is a predictable one 'cop versus serial killer'. What makes a difference in such stories is the treatment meted out and the way narration of storyline flows. Keeping in mind a sequel coming up next, this story is good enough to set the tone and tenor. Read it if you love crime stories.

P.S - Thank you Maxine and Booklover Catlady Publicity for a wonderful story in exchange of an honest review. The opinions expressed are mine alone without influence of any kind.
Book Review