A Bargain In Silver 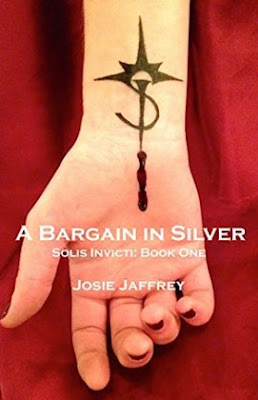 Vampire - Human romance stories are common. Yet, whenever a fresh perspective is added to it that is when a story appeals. This book is the beginner in a series called Solis Invicti.

The plot is definitely different from the quintessential vampire stories. Yes, it is a love story. It may sound cliched but though it is a romance between vampires and humans the focus is also on post apocalyptic London.

Josie has used simple language. However, I felt the descriptions could have been a bit more better. In the sense that such descriptions evoke imageries and I felt that there were a few places where I felt the imageries weaken. The narration is smooth and I did find a few places that could have been elaborated a bit more. But then, this is the first book in the series so it is possible that few portions may have been left out deliberately in order to be continued in the next book.

The main characters have been well-etched with the right amount of a mysterious aura around them. The Silvers are intriguing. Their interactions reflect varied emotions.

To sum up, the book is worth reading because of its unique treatment to a cliched plot. The cliffhanger is superb and makes you want to read the next in sequence.

P.S- Thank you Josie for a superb story. The review is my honest opinion after I read the book. Bargain in silver has been rated silver now but I am sure it will earn gold in the second book.
Book Review