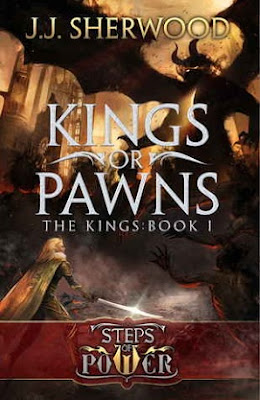 There are times when conflicts are not between two individuals but amongst an individual and a system. This story is a depiction of similar plight.

The plot revolves around a king and his questions against the working of his council. Does he remain the king or does he become a pawn in the hands of others? Well, you need to read this fantasy story and a beginner of a series to find out.

Sherwood aces with his descriptions. Though the start is slow yet the narration makes a reader believe that he or she is a part of an ongoing motion picture similar to Lord of the Rings or an episode like that of Game of Thrones. The story definitely has the makings of a blockbuster. The writing is smooth but the reason that too many characters were introduced and that created a bit of confusion in my mind. Then again, this book is the beginning of a series. Hence, maybe according to the author such introductions were felt necessary. Maybe it is a deliberate attempt by the author to create a fog of confusion in book one only to be cleared in later series.

Though there are too many characters, the protagonist and antagonist were easily identifiable. This definitely is a high point because unless the writer is adept at handling characterisation, the main characters tend to get lost in a huge crowd. Kudos to the author for acieving this impossible feat.

To sum up, the stiryline is amazing and the book is superb. In a subtle way, the author does succeed in hinting that like the protagonist we too are like kings in some situations but pawns when it comes to others. A must read if fantasy genre interests you.

P.S - Thank you JJ for an amazing story. Had to force myself to reduce a star because I am now looking forward to more clarity and an awesome book two. This review is my honest opinion after reading the story.
Book Review