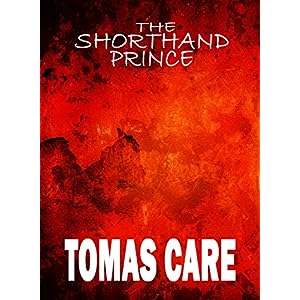 The Shorthand Prince is the first book in a series called the The Three Cards. To call it a fantasy fiction will be like underrating it. It is like an allegory from which parallels can be drawn in real life situations as well.

The book revolves around King Sultes. Its his story all the way. The conflicts between his roles as a king, a husband and a father form up the central theme. King Sultes is a character you will love to love and love to hate at the same time. What he does as a father is well-justified, after all, love for one's child will make a parent go to any extent. But yes, as a king, it is totally unacceptable. A king is a protector of his subjects, hence his turning out to be their silent destructor, is an absolute no-no. When you finish reading the story, it will make you want to forgive King Sultes as a father but not as a king.

Tomas Care has an awesome imagination and his creativity has ensured that the world he has created is impeccable. His descriptions are well-worded and trigger visual imageries in the reader's mind. His narration is gripping. His characterizations have their traits well etched. The internal conflicts of major characters are well depicted.

To sum up, once you finish this book, you will want to read the next for sure.

P.S - Tomas your imagination is your strength.

GR Comment:-
It was our good luck that we happened to have an Up, Close and Personal chat with Tomas. Check out our Rendezvous With Tomas Care !!!
Book Review