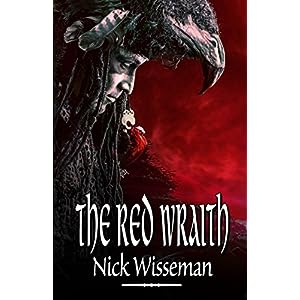 The Red Wraith is a story which intrigued me since the very first chapter. Never had much exposure to historical fiction, but this story had the power to keep me glued till the end.

Nick has a writing style that can keep you guessing whats going to come up next. His narration is undoubtedly a mix of fantasy, fiction and history, but kudos to him to have kept the historical facts as they were. Definitely well-researched I must say. Especially for me, though I am from India with not much awareness about Native Americans, this book led me on a journey towards discovering a whole new world.

What sets this story apart is that, inspite of being based on Native Americans, the descriptions regarding destruction and the way a whole community getting wiped, does ensure development of a feeling of empathy.

Naysin is a character who has the qualities of being loved, hated, sympathised and felt sorry for. His character compelled me to think about the younger generation of the modern world. Whoever says history repeats itself is right. Its so easy to mislead the youngsters because they are naive. They have the abilities to wreck havoc. But it doesnot mean that they do not realize their wrongdoings. In the ling run, they definitely feel guilty and try to atone. So the question is, isn't it the moral responsibility of we adults to ensure that whatever influence is exerted on the teenagers is positive? Such constructive influence will not only empower these youngster but also lead to a better world. Nick, hats off to you to subtly bringing this out in your story.

To sum up, The Red Wraith is a beautiful melange of history, fantasy and fiction. There are portions which appear distorted and confusing, but these are definitely very much a part of the story that unfolds with each page turn.

P.S- Your book had inspired me to read more historical fiction Nick. Its History time for me now ;-)"
Book Review