By Purple Owl - October 20, 2015
It was serendipity which made us discover the writings by an awesome Author, Tomas Care. In fact, if we say that we owe it all to The Shorthand Prince, we won't be wrong!!! Tomas has oodles of creative imagination which definitely generates envy. Here's a snippet of our chat with him. 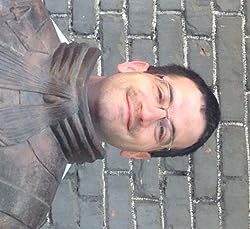 GR: Who is Tomas Care in real life?
TC: I was born in Salisbury, England in 1980 to an antique book seller and a nurse. I write part time, with the rest of my time wasted on earning and studying.

GR: Wow!!! This is what people call True Dedication!! Now that your books are available for reading, tell us how does it feel to be a published author/writer? What are your preferred genres? Do you have a specific choice of genre?
TC: It's really cool having my books out there. Before self-publishing was a viable option, I didn't really expect I'd ever get one of my stories in print. I managed to get Bloomsbury interested in one book when I was a teenager, but I think they must have realised how raw I was.

I've dabbled in science fiction but fantasy is definitely my genre now. You can write about things that would never be possible otherwise. It's kind of like making a rod for your own back though, inventing rules that your world must adhere to. I find that brings out the best in me.

GR: Absolutely. So does the space around you resemble a scene from the Flights of Fantasies you have created?What does your writing place look like?
TC: At a laptop, on a sofa, in front of a television, worryingly close to a playstation controller…

GR: Well...that is what best describes 'techno fantasy'!!! By the way, which of the fictional characters created by you is closest to depicting you and why?
TC: Well at six feet and five inches, it would be easy to compare me to one of the tall characters I've written, such as the architect/shipwright Nezz Glenny. I like to think that I'm of infallible character, but as with all people who assume that of themselves, I'm not! So perhaps in that way I'm like King Sultes Fahrenne, the main character in my first book 'The Shorthand Prince', or Yucles Iyassi, the titular Great Scribe from book 4.

GR: Whoa...now that sounds like a combination of attributes. What, according to you, are your strengths and weaknesses as an author/ writer?
TC: I have a ridiculous imagination. This is both my strength, as it lends itself so beautifully to fantasy, and my weakness, as I don't know when I've let myself get too carried away.I also struggle with discipline. I'm pleased that I've got so much going on in my life, but I really wish I could find the time and discipline to write more.

GR: Your imagination is definitely your strength. To write about an imaginary world with a bit of yourself does require oodles of creativity. Describe the latest book that you have written. Where can we buy it?
TC: I've just published the final book in a seven part series. It's called 'The Immortal Queen' and resolves along running rebellion that has been waged in honour of Queen Acalletta Fahrenne, whilst she is comatose and captive.The series of books focuses quite strongly on the disastrous cycle of revenge in a world which is already dangerous and deadly. The queen is magically protected from harm - something that I wanted to accentuate by making my world as brutal as possible - and she wakes up in this book.The series is written so that she is one of a number of heroes/heroines with seemingly insurmountable power. They are then pitted against an enemy so overwhelming that even these great champions might not be victorious.You can read about the Queen's battle, and her Fahrennic Rebellion on Amazon UK .

GR: True creativity definitely needs inspiration. Who and/or What inspires you the most? Why?:
TC: Originally I was inspired by writers such as Terry Pratchett, who seemed to have boundless imagination and a crucible in which that talent could play out.Encouragement from key people in my childhood have shaped my ambition to be a writer though - my parents, godparents, sister. I remember all my English teachers, they are all responsible for the books I've written now. As an adult, I'm spurred on by the support and interest of my friends and girlfriend.

GR: With so many books to your credit, do you ever have leisure time? What all do you do when you are not writing? And in your case, if ever you take a break from writing non-stop!!!
TC: I pick up the playstation controller! I'm a keen moviegoer too, and still try to play a bit of football even though I'm knocking on a bit now...

GR: No wonder you keep the play station controller close to you!!! By the way, which writing project are you currently working on?
TC: The 7 part series I just finished was written in quite a quick style, as an effort to learn about constructing plot. I'm really pleased with how they turned out but I still prefer a more patient, descriptive style. I'm now writing 'The Stars from the Dead', which is set in the same world as my previous books, and is chiefly about the belief that a new world can be discovered, and that a fallen hero from the concluded rebellion is to be buried there.The first half of the book is set at sea. The second half is set in the discovered new world.

GR: Well, now that you have so many books to your credit, and many awesome writers have inspired you, lets say, if you could re-write one Fiction/Non-Fiction written by another author, which would it be and why?
TC: The Knight by Gene Wolfe. It's the sequel to The Wizard and in my opinion lets the first book down (just a little). I'd love to try and tidy it up. Of course, it is just possible that I missed the point, Wolfe is the master, after all.


GR: Thank you so much Tomas. It was great knowing you. I am sure your books will soon be the inspiration for many wannabe writers in the Fantasy Fiction genre. We wish you the magic of good charm that never ends, spells for good luck that always work and eternal creative imagination.

Tomas Care is an Author who combines fantasy with realism, a Writer who loves to tell stories, a person for whom creating stories is a way of life. Loads of Luck to this wonderful Author.

P.S:- We were lucky to lay our hands on one of his Book at Kindle Store. Here is our review of The Shorthand Prince..
Interview