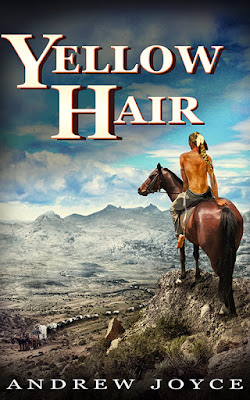 My name is Andrew Joyce and I write books for a living. I would like to thank Reading writings for allowing me to be here today to promote my latest, Yellow Hair, which documents the injustices done to the Sioux Nation from their first treaty with the United States in 1805 through Wounded Knee in 1890. Every death, murder, battle, and outrage I write about actually took place. The historical figures that play a role in my fact-based tale of fiction were real people and I use their real names. Yellow Hair is an epic tale of adventure, family, love, and hate that spans most of the 19th century.

Through no fault of his own, a young man is thrust into a new culture just at the time that culture is undergoing massive changes. It is losing its identity, its lands, and its dignity. He not only adapts, he perseveres and, over time, becomes a leader—and on occasion, the hand of vengeance against those who would destroy his adopted people.

Now that the commercial is out of the way, we can get down to what I really came here to talk about: the Sioux people. The people we know as the Sioux were originally known as the Dakota, which means ally. The name Sioux came from the Chippewa and the French. The Chippewa called them Nadonessiou, which means adder, or enemy, and then the French shortened the name to Sioux.

Every culture has an origin myth. We in the West have Adam and Eve. The Ancient Greeks had Gaia. According to the Norse people, Odin and Ymir founded the earth. If you will allow me, I’d like to tell you the creation story of the Dakota.

In the beginning, before the creation of the earth, the gods resided in the sky and humans lived in darkness. Chief among the gods was Ta՜kuwakaŋ, the Sun, who was married to Haŋyetuwi, the Moon. He had one daughter, Wohpe. And there was Old Man and Old Woman, whose daughter, Ite, was wife to Wind, to whom she gave four sons, the Four Winds.

Of the other spirits, the most important was Iŋktomi, the devious trickster. Iŋktomi conspired with Old Man and Old Woman to increase their daughter's status by arranging an affair between the Sun and Ite. His wife’s discovery of the affair led Ta՜kuwakaŋ to give the Moon her own domain, and by separating her from himself, created time.

Old Man, Old Woman and Ite—who was separated from Wind, her husband—were banished to Earth. Ite, along with her children, the Four Winds, and a fifth wind—the child of Ite but not of Wind—established space. The daughter of the Sun and the Moon, Wohpe, also fell to earth and later resided with the South Wind. The two adopted the fifth wind, who was called Wamŋiomŋi.

Alone on the newly formed Earth, some of the gods became bored. Ite prevailed upon Iŋktomi to find her people, the Buffalo Nation. In the form of a wolf, Iŋktomi went beneath the earth and discovered a village of humans. Iŋktomi told them about the wonders of the Earth and convinced one man, Tokahe, to accompany him through a cave to the surface. Tokahe did so and, upon reaching the surface, saw the green grass and blue sky for the first time. Iŋktomi and Ite introduced Tokahe to buffalo meat and showed him tipis, clothing, hunting clubs, and bows and arrows. Tokahe returned to the underworld village and appealed to six other men and their families to go with him to the Earth's surface.

When they arrived, they discovered that Iŋktomi had deceived Tokahe. The buffalo were scarce; the weather had turned bad, and they found themselves starving. Unable to return to their home, but armed with a new knowledge about the world, they survived to become the founders of the Seven Council Fires.

After Tokahe led the six families to the surface of the earth, they wandered for many winters. Sons were born and sons died. Winters passed, more winters than could be counted. That was before Oćeti Šakowiŋ. But not until White Buffalo Calf Woman did the humans become Dakota.

Two scouts were hunting the buffalo when they came to the top of a small hill. A long way off, they observed the figure of a woman. As she approached, they saw that she was beautiful. She was young and carried a wakiŋ. One of the scouts had lustful thoughts and told the other. His friend told him that she was sacred and to banish such thoughts.

The woman came up to them and said to the one with the lustful thoughts, “If you would do what you are thinking, come forward.” The scout moved and stood before her and a white cloud covered them from sight.

When the woman stepped from the cloud, it blew away. There on the ground, at the beautiful woman’s feet, lay a pile of bones with worms crawling in and among them.

The woman told the other scout to go to his village and tell his people that she was coming, for them to build a medicine tipi large enough to hold all the chiefs of the nation. She said, “I bring a great gift to your people.”

When the people heard the scout’s story, they constructed the lodge, and put on their finest clothing, then stood about the lodge and waited.

As the woman entered the village, she sang:

She handed the wakiŋ to the head chief and he withdrew a pipe from the bundle. On one side of the pipe was carved a bison calf. “The bison represents the earth, which will house and feed you,” she said.

Having given the pipe to the People, and having said what she had to say, she turned and walked four paces from the lodge and sat down.

When she arose, she was a red-and-brown buffalo calf. She walked on, lay down and came up as a black buffalo calf. Walking still farther, she turned into a white buffalo and stood upon a hill. She turned to bow in the four directions of the four winds and then she vanished.

Because of White Buffalo Calf Woman, they have become Dakota. 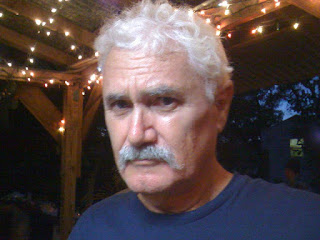 Andrew Joyce left high school at seventeen to hitchhike throughout the US, Canada, and Mexico. He wouldn’t return from his journey until decades later when he decided to become a writer. Joyce has written five books, including a two-volume collection of one hundred and fifty short stories comprised of his hitching adventures called BEDTIME STORIES FOR GROWN-UPS (as yet unpublished), and his latest novel, YELLOW HAIR. He now lives aboard a boat in Fort Lauderdale, Florida, with his dog, Danny, where he is busy working on his next book, tentatively entitled, MICK REILLY.