By Purple Owl - January 07, 2016
We’ve all heard this theory endless times, that one act of kindness can make a man happy who will in turn set upon a chain of kind acts, creating a domino effect and making the world a more bearable place to live in for those people directly and indirectly affected by it. The Krishna Challenge has its genesis in this very theory, however, this time, the challenge urges people to act on it and spread the word about it, which will motivate people to act out of the purity of their hearts, to make life better for people, without expecting anything in return. The second part of the challenge urges the participants to tag or nominate people to take part, which will increasing the circle of influence and encourage people to bring joy, warmth, relief in the life of those they come in contact with, thereby enhancing the quality of life in their eco system.


This challenge is more relevant today, more than ever, as we wake up to news of lynching, bombing and killings on an everyday basis and another world war seems to be dawning on us. The idea of the challenge is to not sit back waiting for the world to fix itself, but to proactively participate in fixing every small and big thing, within our power.


This challenge is a social consciousness effort, which aims to drive change in society and heighten people’s awareness towards their responsibility as citizens. You may wonder why such a challenge is named after Krishna.


Krishna is considered synonymous to the one who intervenes when there is an excess of misery, turmoil and wickedness in society.


So come be a part of the challenge and help us make the world a better place.


Here is what you need to do, if you want to become a part of the challenge:

2. Tag 3 people you want to be a part of the challenge.


3. Follow up and understand the impact your network of kindness  is having upon the world around you. 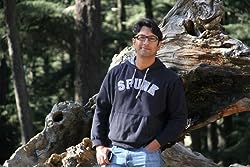 Jagmohan Bhanver is a prolific writer and writing has been his passion since he was old enough to walk. The indelible scribbling on the walls of his previous homes (where he spent his childhood days) bears testament to this insane drive to write. On a more serious note, he penned his first set of verse at the age of eight and this was published as extracts in magazines when he was just about completing his tenth year. Essays, other non fiction writing and short stories formed the bulk of what he wrote in his teenage years. As an adult, he has written several scripts and screenplays for popular TV serials, and is currently fine tuning a script for a commercial film.

His first serious writing (in the self help genre) was completed by the time he was eighteen. It was initially not intended for public reading. However, over the years as he spent time in counseling he happened to share bits and pieces from the book with a large number of people. Reading the extracts surprisingly helped a lot of these people deal with problems and challenges they were facing in their lives. They shared what they had read with others. And what started as a few sheets of paper randomly handed over to a few select people turned into a tidal wave of men and women wanting to read more. It was then in 2004 (eleven years after he had finished the first draft of the book) that Jagmohan decided to seek a publisher for this book.
Guest Post