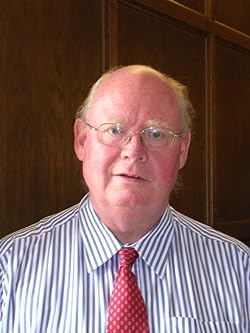 We had an opportunity to meet George W Eccles who has worked as an Advisor to a number of Oligarchs during his stint in Russia. Here is a glimpse of our serendipity with him as a successful writer.


GR: What description will fit you in real life?
GE: To start with the raw facts, I was born, and started my working life, in London. I read law at the LSE, then went on to become a partner in one of the major financial services and consulting firms. In 1994 I started to work abroad, first in Russia and then in Central Asia, and when I returned to my home in France ten years later, I became a non-executive director of a couple of listed companies that had operations in Russia and Kazakhstan. I self-published my first book, The Oligarch, the first in what I hoped to be a Leksin thriller series, in 2012, and Peach Publishing have just published my second, Corruption of Power.

What description fits me? Well, I hope I’ve now made the transition from ‘financial executive’ to ‘author’, but that will be for readers of Corruption of Power to judge.


GR: How does it feel to be a published author/writer? What are your preferred genres?
GE: The answer to your first question is ‘relieved’. As all emerging authors know, the process of finding a publisher is hell. Publishers nowadays publish well-known published authors or celebrities, and resort to taking on new(ish) writers only as a last resort. Everyone tells me that it used to be a great deal easier in the days before all the publishing houses consolidated into a small number of conglomerates and, if this is true, it would be a good starting-point for a competition review. Peach Publishing is a small publishing company and is prepared to take on authors at an early stage of their careers.


As to preferred genres, I write thrillers largely because I read mainly thrillers. If I’m not reading a thriller, then it’s likely to be a biography.


GR: What does your writing place look like? Please describe in terms of location, personal comfort, stationery etc.
GE: I write in the study of my house in France which looks out over the hills down to the sea. The desk is covered in note, drafts, research papers and photos of scenes I intend to use in whatever I’m writing at the time. This study is my favourite room in the house, with sofas and chairs set around the television. I have a new Bose speaker system that blares out mainly classical music while I’m writing.

GR: Which fictional character created by you is closest to your heart? Why?

GE: It has to be my hero, Alex Leksin. He is a brilliant and intuitive business troubleshooter, British born but of Russian descent. Having refined his forensic skills in the serious crime section of MI5, he moved to Moscow when he realised that Russia’s endemic corruption would provide a ready-made, lucrative market for his services. He is not a standard action hero: he is very human with real flaws, at times filled with self-doubt, so driven to succeed that he resorts to artificial stimulants to keep going, attracted and attractive to women his relationships with them never last long. His services are so much in demand that he charges a standard success-related fee of one million euros, and he often uses the proceeds to buy back works of art that his great-grandfather lost at the time of the Russian revolution.

GR: What, according to you, are your strengths and weaknesses as an author?

GE: I prepare an outline of my novels in great detail. It’s a process that can take up to six months, and results in a plan for each chapter.  I can’t see how else I could do it: successful thrillers require both that the surprises, thrills and twists are properly set up as the book progresses and that the detailed timeline works.

I try to make the thrillers rattle along at a good pace, while allowing enough time for the characterisations and sense of place to develop. I find this a difficult balance to achieve, and almost always the comments of my team of readers help enormously in this respect.

My main weakness is time. I am easily distracted and have various social commitments that I try to keep up even when the manuscript has reached a difficult stage. This weakness particularly comes into play when, as now, I’m working hard to promote a new book.

GR: Describe your latest book. Where can we buy it?
GE: Corruption of Power is the second in the Leksin thriller series. The first was The Oligarch. The main protagonist is Alex Leksin, an independent troubleshooter, who is brought in by President Karpev when his plan to reduce Russia’s reliance on an ever more hostile Europe is put at risk. Following the events in Crimea and Eastern Ukraine, the President is hell-bent on further territorial expansion, and his strategy is first to shift the markets for his country’s energy to the East. Failure could mean catastrophe.Against a background of political corruption, state-sponsored terrorism and increased Taliban insurgency, Leksin’s investigations take him from Moscow to Turkmenistan, one of the world's most sinister countries, right at the heart of Central Asia.

A number of character who first appeared in The Oligarch return: President Karpev himself; Nikolai Koriakov, Leksin’s best friend from his Cambridge days and now one of Karpev’s blue-eyed boys, and Nadia, a freelance terrorist.


The book is available from all global Amazon stores, including Amazon UK  Amazon USA Amazon India
Readers can find out more about me and the book on my website: http://www.gweccles.com

GR: Who and/or What inspires you the most? Why?
GE: Thriller writers, generally. The best thriller writers are such gifted storytellers, and weave complex plots most cleverly. My particular favourites are John Le Carre (the ‘master’, so far as I’m concerned), Robert Harris and James Patterson. In different ways, they are all achievement targets at which to aim.

I should perhaps also mention Gillian Flynn. I thought Gone Girl was brilliant.


GR: What all do you do when you are not writing?
GE: When I am not planning another story or actually writing it, I like good food, play bridge and go to the opera. Most recently, I am very occupied with my new bulldog puppy called Boris. He’s eight weeks old and chews everything, especially me!


Having lived for ten years in Russia and Central Asia, I am also naturally interested in these regions, so I follow what is going on there closely in the national and local press. I’m on the constant lookout for potential new plots.

GR:  Which writing project are you currently working on?
GE: I’m half-way through the first draft of the third Leksin thriller. It was inspired by a newspaper article about a small group of investors who lost vast amounts of money in a Moscow scam and then, one by one, died in mysterious circumstances. No one has ever found out where the money went or why they were killed. Leksin will!

GR:  If you could rewrite one Fiction written by another author, which would it be and why?
GE: Tinker Tailor Soldier Spy. A masterclass in plotting and letting a story unfold at its own pace, while keeping the reader riveted throughout. To my mind, Smiley is one of the standout characters in thriller writing.
Interview