By Purple Owl - February 01, 2016
Huge hands grabbed her from behind, pulling her backward until she collided with a rock-hard chest. Tamsin inhaled, about to scream, but a palm clamped over her mouth. A moment later, the man’s free arm grasped her middle. Tamsin lunged forward, but his grip was an iron bar. Her next move was to kick back, aiming for the man’s knee. She missed, catching only his shin with the soft sole of her boot. He grunted and pulled her against him so tightly she could barely breathe.

“Don’t,” he said, the word clipped and cold.

Tamsin froze, going utterly still. Whoever this was, his psychic shields were so powerful he’d been completely hidden from her scan. After fretting about evil creatures stalking witches, she was too scared to reach for her magic. Every instinct warned her this stranger would not tolerate further defiance. This was a professional. A predator. A true threat. She knew it on a level so primitive it was coded into her DNA.

Her obedience seemed to work, because the hand clamped over her mouth slowly moved away. He tasted of salt, sweat and man. He hadn’t used weapons to overpower her, just brute strength. That show of confidence made him seem all the more deadly.

“You will not cry out.” His words had traces of a brogue—Scottish, perhaps. His deep, masculine voice vibrated through the line where their bodies touched and sank into her bones.

“Please,” she said, her voice barely above a whisper. “What do you want?”

The arm locked about her loosened, allowing her to move but not to escape. Tamsin shrank away as far as she could, the heat of his body a sharp contrast to the cool November air.

“Turn,” he repeated. “I want to see your face when I question you.”

Tamsin obeyed, sliding within the circle of his arm. It put their faces barely twelve inches apart, and that was only because he was so tall. Her first instinct was to avoid eye contact, to rebel at least in that small way, but curiosity won. She snatched a glance from under her lashes.

She froze all over again as he nailed her in place with a brilliant blue gaze. He was younger than she’d expected—maybe in his late twenties—and handsome enough that she forgot to breathe. His face had strong bones, the features bold and almost sensual. Heat rose to her cheeks as her insides curled into a protective ball. He was far too magnetic, far too there for comfort.

He studied her face a moment longer, his gaze filled with bold assessment. It finally broke when the corners of his mouth quirked. “You are the historian who is supposed to explain this place to visitors, Tamsin Greene?” 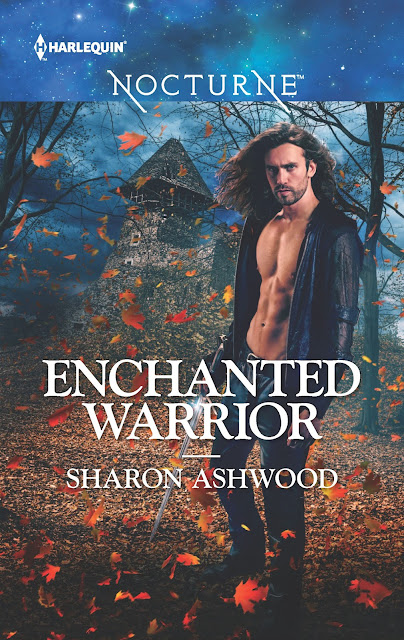 In an age clouded by legend, Gawain was one of King Arthur’s greatest knights. When he awakens centuries after the fall of Camelot, he faces his most daunting quest yet-the search for his missing companions. His hope is that Tamsin Greene, the alluring historian at Medievaland Theme Park, can help him. Then he senses the magic within her… Gawain will now have to trust a witch-and his own heart-to rouse the knights of the Round Table and save humanity from a faery onslaught. 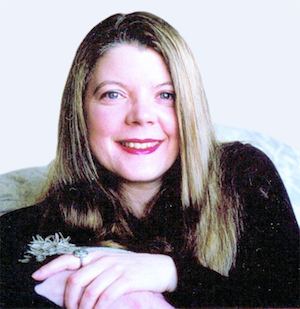 Sharon Ashwood is a novelist, desk jockey and enthusiast for the weird and spooky. She has an English literature degree but works as a finance geek. Interests include growing her to-be-read pile and playing with the toy graveyard on her desk. As a vegetarian, she freely admits the whole vampire/ werewolf lifestyle would never work out, so she writes her adventures instead.

Sharon is the winner of the RITA® Award for Paranormal Romance. She lives in the Pacific Northwest and is owned by the Demon Lord of Kitty Badness.