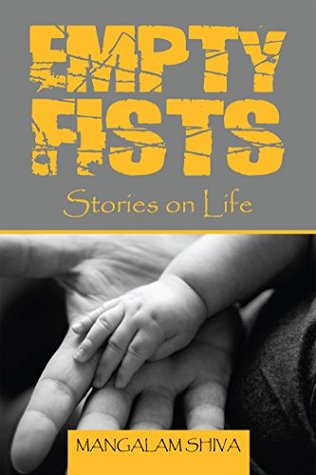 Empty fists have nothing within them, some say. But for me, they are generally filled with hope. Read an anthology of stories by Mangalam Shiva.

The theme for each story was based on important issues. Each plot is relevant in today's social scenario. Dowry, neglect, abuse, you name it and it was there. A segment was narrated through the eyes of a dog, which is a novel concept. Characters chosen were Indians and could be easily associated with.

Yet, there was something amiss. The author attempts to highlight social issues- great, but narration was a big let down. It got repetitive in some places. The tone of narration was monotonous with the tendency to get misconstrued as advisory rather than story. The choice of words lent an impersonal  touch to it. Also, Chapter numbering or changes in scenes within a story were confusing at times. The concept were good but characters were not very strong to be able to leave a lasting imprint on the readers' mind.

I read once, and took a real long break  before I read it again. Sadly, its impact was the same. I truly wished that the author had tried getting a good editor, maybe then the choice of words and language would have been more appealing. The same stories, had they been translated into Tamil or any other Indian language, would have enhanced narration. I would have given it a three or four stars  but the narration and language usage were a serious letdown. Also, the books I have rated three or four stars are way too superior to this anthology in terms of language and character portrayals. It is definitely unintentional (I am sure no author would knowingly do it) but inspite of the author putting in his best efforts, there are missing elements. I really felt helpless when giving it two stars, but narration was not powerful enough to match up to the issues being highlighted. Not that I possess thorough knowledge of Her Majesty's language, yet, my assessment is on the basis of my understanding only.

To sum up, the anthology is readable at least once, especially for the relevant social themes they address. To reiterate, the themes chosen for each story are powerful, but sadly, the narrative style was bit of a disappointment.

P.S- Being an optimist, I am sure, the next attempt would definitely be way  ahead of this book. As is said, where  there is a will, there is a way.
Book Review