Brian Boru: Freedom Within The Heart 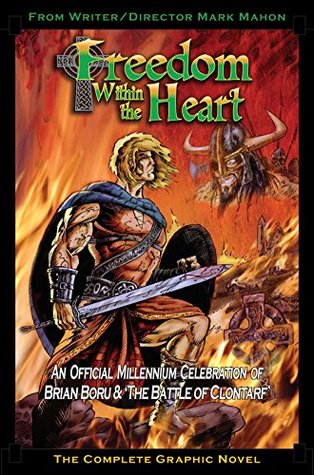 History has always intrigued me and yes, it has never been my stronghold. However,  Mark  Mahon's story about Brian Boru changed my perception regarding this genre.

First things first, I finished the book in one sitting. And I attribute it to the plot. What a story! The plot may appear to be cliched for some, but for me, it opened up a whole new world from an era gone by. It had everything in it to make it an enthralling read. Betrayals, siege, love, patriotism, wars, anger, you name it, it was there. History retold in all its splendour with its grandeur quotient intact!!!

It was Brian Boru's story all the way. It hurts to be treated as second citizen in one's own land and Brian's emotions were no different. His rise from a fearless village kid to a warrior fighter definitely speaks volumes about the feelings a true patriot has. His portrayal depicted the characteristics that a true real-life hero has. As his perfect antagonist, Ivar the Limerick, was one man anybody would love to despise.

Reading the story was  almost like watching a movie in the mental screen. The narration evoked all possible kinds of imageries which appeal to all known senses. The language was emphatic and succeeded in convincing that all that was written were true historical facts. Mark has a great writing style. His choice of words evokes the emotions apt for that particular scene. Besides, the continuous flow and smooth transition between chapters made it easy to comprehend and read.

The story was a wonderful literary journey into that phase of historical past where love for one's country and concern for one's fellow beings topped a man's list. There was hatred and bloodshed, but only against apathetic tyrants. So very unlike modern day's plight where it is becoming difficult to differentiate between a friend and foe. One can never be free if the freedom is not from within. In today's world, there is not a sinngle person  who is free inside; there is always a deep-rooted fear of something or the other. What irony!! People like Brian Boru tried teaching us about Freedom from within, and modern man talkks of fear from within.

To sum up, this book made me fall in love with history. It made me realize that each country has a plethora of stories to offer with regards to its past. Reading this book has created an interest to seek stories about heros like Brian Boru.

P.S- An amazing book that will make you want to read more of its kind. Great writing Mark!!!