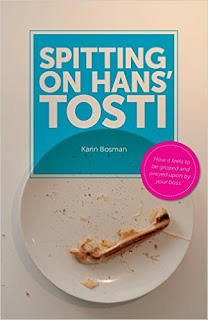 The first thing which attracted me towards this book was its blurb. Believe me, it is really not easy to open up your deepest wounds to the entire world. Hats off to Karin for being so brave.

The plot revolves around the theme of sexual harrassment at workplace. It is a fictionalised narration of real happenings. Yet, but for the names, everything else is as real as can be. Sexual harrassment is something which many employees undergo irrespective of caste, creed, religion, country and even gender. Sadly, it goes unreported most of the time. The victim either keeps quiet for the fear of humiliation when incident is brought to light, or for repressing the pain associated with such trauma.

Karin's narration is a lifesaver for everyone who is likely to be a victim or is already one. The comparions through a tosti is one of the best part of her writing. The language is hard hitting; it will make you squirm and feel helpless at the thought of not having been there to protect the protagonist. The language may be initially a bit different but the understanding and empathy grows with each page.

The characters are all really well etched out. Sadly, each of them exist in the real world. No matter which part of the world one is from, everywhere, there are those who are silent spectators, thus supporting this heinous act. If only such people open up the moment they see such thing happening around them, they themselves will never get victimised at later stages.

To sum up, speaking up for a prevalent evil in today's society is not everyone's cup of tea. And an effort of not just talking about such tosti and subsequently condemning it is commendable. If you are also in favour of a safe, amicable and harrassment free workplace, this book is a must read.

P.S - Karin, hats off to your spirit and courage, girl!!!
Book Review