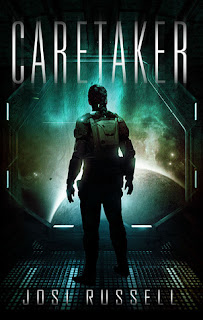 I was advised to read this book first before I proceeded with Book Two - Guardian.

Frankly speaking, the plot concept was unique, however, there was something missing in the storyline. I am not a avid sci-fi reader, but, my basic requirement is that the story should keep me hooked onto it. Sadly, after a few pages, I had to make a deliberate attempt to concentrate.

Josi can conjure up imageries with the words she chooses to write with. Hence, the language used justifies this. It is also a known fact that a story which focuses on two or less than two characters definitely needs a gripping narration to retain the reader's attention. However, I personally felt a disconnect between the characters, or rather, in their descriptions. Also, the ending is too abrupt to put two and two together.

Coming to the protagonists, the concept could have become the real hero, but instead, we have two characters who could have had spark but turned out to be average. The thought of bringing out human relations in unique situations, like the one described in this story, is novel. But as the story progresses the distance and disconnect between the characters overshadows this thought.

To sum up, this story had everything in it to make it an all time favourite, however, there were too many missing elements that could not be ignored. Worth reading for the efforts put in by the author.

P.S - I received a free copy in exchange of an honest opinion. Thank you Future House Publishing.
Book Review