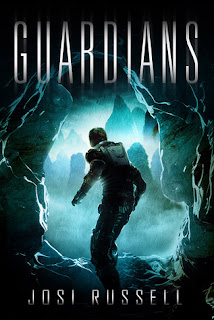 Book One was a bit of a disappointment. The Caretaker failed to impress me even though he had immense powers. But Book Two is a improved version.

The Guardians have a challenging task. Here also, the plot revolves around Ethan, the former Caretaker, now a Guardian. However, the story addresses a few socially relevant issues such as unemployment and income equality. The best part is that these are depicted in an alien world.

Josi definitely is a writer to watch out for. She has expressed herself more creatively in this sequel than the first one. Her narration is like watching a movie. There are still a few glitches here and there. But the marked improved style has made me want to read the next book in sequence.

In this story, there are many more characters as compared to Book One. Though initially their introductions might confuse the readers, the later half of the story manages to bring out the unique characteristics and a better understanding of the characters.

To sum up, this book is definitely worth reading. Best part is, it can be read in isolation as a stand alone story. However, reading the Caretaker first definitely makes it easy to connect with the Guardians.

P.S - I received a free copy in exchange of an honest opinion. Thank you Future House Publishing.
Book Review