Life On Base: Quantico Cave 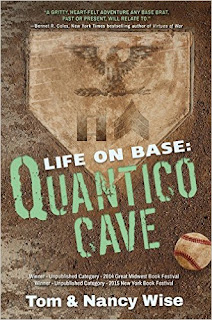 The life of a military brat, the term by which a child of a defence personnel is known in the civvie street, is never easy. Being a parent of two such brats, I could easily appreciate the story by Tom and Nancy.

The story is based on a set of kids whose parents are posted to a marine corp base at Quantico Cave. I will not elaborate further since I fear I might give away too much in the bargain. Let me simply say that military service across the world and irrespective of arm (Army, Navy, Air Force, even Paramilitary forces) are bound by a common thread - love for one's country.

The personnel directly functioning in it as well as their families live a life which is not exactly a bed of roses. Military brats, are also one of the most teased group of kids because to many people in the civvie street (in many countries), these set of children supposedly belong to a privileged class. But let me place it on record, our military brats are not a spoilt lot but solid pillars of strength when the going gets tough.

The kids in this story  portray the different shades of a military brat. Strong, emotional, situationally aware, independent, fearless, these kids are more of an asset than being a pain in the neck. These kids also help in highlighting the cohesion, brotherhood, discipline, attention to detail, quick thinking, decision making, leadership, integrity, responsiveness that can always be found in a defence setup. At the same time, there is pain, fear of losing a dear one, anguish, uncertainty, regular shiftings and lack of stability.

Tom and Nancy have beautifully depicted the military life through the eyes of children. The writing is definitely engrossing and narration succeeds in bringing a smile on your face as you near completion. The imageries this story evokes is truly as if the reader is very much a part of the proceedings. At times, you feel like actively participating as well, however, sadly, there is no such provision to jump into the story and butting in.

To sum up, I loved every bit of the story as I can practically see it happening all around me. Though my kids are miles away from Quantico Cave and not in the same arm of the military, still, once a military brat, always a military brat.

P.S - This book definitely gives a peek into military life and worth reading more than once. Awesome story Tom and Nancy!!!