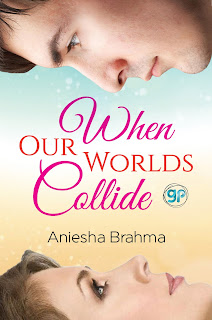 I guess the thing that I intrigued me was the fact that it’s not always about the happy ending. Sometimes, it just the story that is more important. Because if every girl who fell in love with a guy, got her feelings reciprocated and rode off into the sunset, it wouldn’t be real life. It would be a fairy tale. I did not want to write a fairy tale. I wanted to write a story that seems real, that people could relate to.


So I thought about this girl called Akriti who develops a crazy crush on a guy she meets quite by accident. She realizes later on that she would never act on those feelings because he has a girlfriend. A girlfriend that I did not put in the story as an obstacle, but as something that is very much a part of our lives. How often have you heard the joke, “everyone I like is either gay or taken?”

When I first began to paint Zayn with words, he was not called Zayn. He was called Piyush. In a short story called, “The Walk” (which is up on my blog), Akriti and Piyush take an evening stroll through Gariahat, talking nineteen-to-the-dozen. But once I concluded that short story, I felt as though there was more to their story. They could not just be friends who met up, walked and talked.

I began to piece together their histories, how their lives would intertwine with each other, how they would be drawn to each other’s lives like magnets against all odds. I wrote out the entire plot outline, added the secondary characters of Ayoub, Suzanna and Surbhi. (Each of them scheduled to appear for an interview of their own on my blog.)

Akriti and Zayn’s story basically tests the limits of their friendship. I am sure people can relate to it. They would be able to relate to the drama, the fun and the heartbreak that accompanies crushing on your friend.

After fleshing out the story a little, I decided to do something that I had never done in my earlier works. I decided to introduce characters from another work of fiction of mine in this story. The other novella would then act as a companion to this novella. So, that was a lot of fun. We will let you guess who those characters might be because we want readers to tell us who they want to read about next!

A question that I am sure will be asked of me is if this story was based on real life. Well, I am always inspired by real life. In fact, sometimes I put people I know into my stories. One such example for this particular tale is Suzanna was inspired by Diptee di, and she picked out the name herself. Although she named her character after the Suzanna from Ruskin Bond’s short story and novella, Susanna’s Seven Husbands. I just insisted on using a different spelling.

As for who Akriti, Zayn and Ayoub are based on: well, some elements for Akriti were borrowed from some pretty women I know. Ayoub was a figment of my imagination, and Zayn had been based in part on someone that I used to know. But my imagination made him into someone I wanted him to be. Not the person that he really was.

Coming back to When Our Worlds Collide, I was determined to tell the story of a mad crush and how it ends realistically in the story. Do they get their fairy tale happy ending or don’t they? You will just have to read the novella yourself to find out.

Aniesha Brahma knew she wanted to be a writer since she was six years old. She was schooled in Dolna Day School and went on to pursue B.A., M.A., and M.Phil in Comparative Literature from Jadavpur Univeristy. She currently lives in Kolkata, with her family and five pet cats. The Secret Proposal was her debut novel, followed by The Guitar Girl. She was a contributing author with her story The Difference, in the anthology: Voices, Old & New. When Our Worlds Collide is her third work of fiction, and first novella.

.
Akriti has led a pretty much sheltered life.
Zayn has been shuttled from city to city when he was growing up.
She is comfortable watching her life from the sidelines.
He wants to feel rooted to a place he can call ‘home’.
They meet each other quite by chance.
And both seize the chance to be someone they both need in their lives:
For Zayn, it’s a 'Partner-In-Crime'.
For Akriti, someone who just knows how to be there for her…

When their worlds collide,
It is not what either of them expected it to be.
Zayn has a steady girlfriend. And Akriti has a crush on him.
What happens when these two become friends?
The biggest adventure of their lives? Or the road to heartbreak?
What happens when two completely different people collide?
Do they become friends? Or, is their friendship doomed from the start?
'When Our Worlds Collide' is the story of two twenty-three-year olds, Who are finally growing up and finding their feet in the world.

A tale of friendship and love, crushes and betrayals, messes and second chances, Marriage and divorce… and the elusive happily ever after!