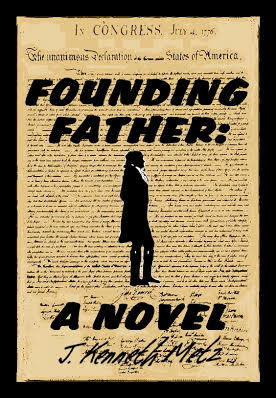 There are some books which cannot be proved to be historically correct, thereby leading to lot of 'May be' or 'May not be'. Founding Father is one such story.

The story revolves around Thomas Jefferson's first law professor. But how much of it is true and how close it is to reality is something I am not in a position to judge nor have I researched upon. Hence, I have taken the story at face value, reading it like the author has said, a novel.

Kenneth has tried to depict 19th century America through descriptions and conversations between his characters. While at some places the description is as real as it can get, there are other places where a subtle doubt creeps in. The reason for me to think so was a change of names. I personally feel that History is something which is best understood when real characters, people from real life, are depicted as they are without tweaking. That's the reason for two stars less.

The story of love between an aging man and his housekeeper does depict "Opposites attract". The fact that the difference in the colour of their skins was not taken kindly by people around George Walker is understandable. It goes without saying that an interesting plot lost is lusture somewhere down the line.

As far as the writing style is concerned, Kenneth does manage to evoke visualizations. In fact, if the aberrations are sorted out, this story has the potential to be a TV Series or a historical movie or even a play. The language is not very difficult. But the content is for a mature audience only.

The characters are convincing in their respective roles. But how close to real-life existence, is a question I need to research upon.

To sum up, the book started off with a bang but lost steam midway. But since this is the first book by the author I am sure, his next book will take care of all the nuances.

P.S - Kenneth, I do hope you have another book up your sleeve.