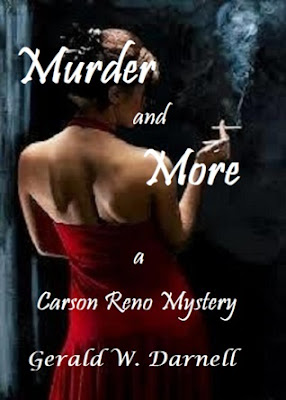 This book promises to deliver exactly as its title. Yes, there is murder and more in the story. It is a mystery novel that is worth reading. I read it in one session straight.

The plot deals with a murder, the trials associated with it, the investigations behind it and of course oodles of suspense. On the other hand, this book deals with human greed, disgruntled yet calculative spouses, infidelity and more. The issues that the story touches upon truly reflects the title in an apt manner.

Gerald has the writing style that is capable of keeping you captivated and hooked on to your seats. The kind of suspense and aura that is trademark for mystery novels has been woven like magic. His narration makes visual imageries pop up in one's head. The only little hitch is a bit of repetition in dialogues that adds a tinge of monotony to an otherwise wonderful book.Instead of following the cliched route, Gerald has taken pains to describe an era gone by. The architectural descriptions, the detailed narration about people living in the sixties are something worth appreciating. It makes a reader feel as if he or she has been exported to the days of the past.

The characters are truly interesting. Each one has a distinct personality that has been well-etched. No where in the story did I feel the irrelevance of a character. The best part is that Gerald recreates the world as it was in the sixties and the people accordingly. This includes habits, food, fashion and the like.

To sum up, this book is fast paced and doesn't bore you at any given point. In fact, you will want to read 'more' after you read about the 'murder'. It is one of those mystery books you would love to have in your collection unless you are a stickler for a perfect book. But then, murder mysteries can never be perfect right?

P.S - I chose to read this book and my opinion is unbiased. Gerald is an awesome writer and the wee bit of glitches would be removed in his next book.
Book Review