Alchemy: A Story Of Perfect Murder 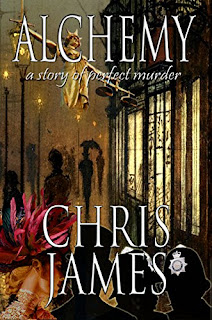 This book is the first part of a two book series. If you think Alchemy is all about magic and trying to strike gold etc., well...its that and much more. First things first, this is one book I will never return to. No...there is nothing wrong with the book, but I guess the genre is probably not my cup of tea. Yet, inspite of this fact, there is no denying that I finished both the books back to to back sittings.

The plot of the book is as the name suggests. It is the story of perfect murder. However, in this case it is actually more than one. That notwithstanding, it can be taken to imply the perfect murder of alchemy per se... Anyways, interpretations are the prerogative of the reader. So each one his or her own interpretations.

Chris has a way with words. In fact, the manner in which he writes makes you literally squirm and twitch in your seat. The mood is dark. Even the love story entwined is not one that would give out a happy feeling. So, for all the die-hard romantics, this book is a no-no for you. Read this story for the Gothic yet vivid imageries that this story is capable of conjuring up. There is violence and that has been described in a manner which will definitely give you the creeps.

There are a lot of characters in this story. However, the anti-hero does end up evoking sympathy in the mind of the reader at times. Yet, he is one character you would really love to hate. The other characters are vital to the plot yet, none actually remains in your afterthoughts in particular.

To sum up, this story of perfect murder did give me a sleepless night. The end had a cliffhanger which made me promptly turn to the sequel. However, yet again, I reiterate, this historical psychological thriller is definitely not for the weak-hearted. I would recommend it to be read only when you are not perturbed with disturbing thoughts late in the night.

P.S- Thank you Maxine and Booklovers Catlady Publicity for introducing me to a genre that was really out of my comfort zone.