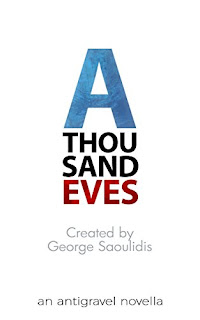 Some books start with a great promise. A Thousand Eves was one such book. The storyline was unique, the concept very different, yet something went wrong somewhere.

The plot revolves around a ship that has only females while all men except one have been eliminated. The one who has been lucky enough to have survived is because he was absent during elimination by virtue of his voyage. I know, it sounds a bit complicated and trust me, it is. This is what can happen when the language used doesn't make sense at some places.

George has a wonderful plot and a different concept, yet the errors that cropped up here and there were a big let down. Though the book is a novella, there were a few characters or situations that could have had a bit more of descriptions. Sometimes, too little information fails to evoke the imageries that are required to get a reader involved.

There are many characters. Luckily, they all have a part in the story. Also, maybe, if George had been a bit more descriptive, the characters could have been comprehended much better.

To sum up, this book is a one time read. George is a promising author and I am sure, his next piece of writing would ensure that these flaws are taken care of.

P.S- George, it was a brilliant concept that was let down by lack of descriptions. I am sure the next book would be much better!!!