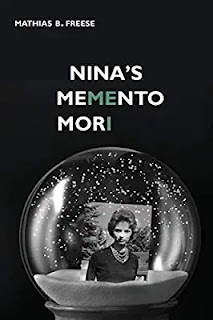 Near the end of Nabokov's Lolita, Humbert makes an honest admission: "[A]nd it struck me...that I simply did not know a thing about my darling's mind." That line sums up the isolate game of memorializing a deceased loved one, which is the basic tension in Nina's Memento Mori, an elegy to Mathias Freese's lost wife. The profound responsibility of answering the question "Who was Nina?" is left to the lone memoirist:
I can say or write anything I want about her...There is much writerly power in that. I am the executor of her probate in all things now. She is mine now in ways she could not be when alive. I am the steward of her memory.
Freese ends up analyzing himself, putting the "me" in "memento" and the "i" in "mori," thanks to ever-giving Nina posthumously providing a therapeutic mirror or "Rosebud," which Freese appropriates from Citizen Kane. But Freese mourns more over the burden of existence than over its loss. Appropriately, for Kane is not about the symbolic sled as much as it's about the cumulative snow that buries it.

MATHIAS B. FREESE is a writer, teacher, and psychotherapist who has authored seven books. His I Truly Lament: Working Through the Holocaust won the Beverly Hills Book Award, Reader's Favorite Book Award, and was a finalist in the Indie Excellence Book Awards, the Paris Book Festival, and the Amsterdam Book Festival. In 2016 Tesserae: A Memoir of Two Summers, his first memoir, received seven awards. The following year his second memoir appeared, And Then I Am Gone. Find him on the internet in the following places:-

Reviews
A soul-bearing, heartbreakingly-beautiful memoir that strips away the frivolities of life; it speaks of loss and the pro-
found depths of sorrow experienced after the death of a loved one. I was incredibly moved and brought to tears more
than once.” —Bobbie Crawford, Book Publicist at Nurture Your BOOKS