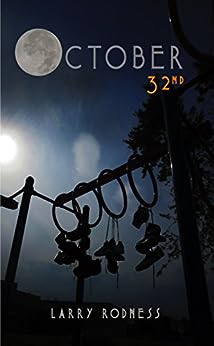 Some stories have the ability to surprise you with a shock effect. This story was one amongst them. Loved the concept, the twists and turns....

Well, well, first things first. The plot revolves around a small town called Elora and its famous Halloween Fest. Right in the middle of the unexpected turn of events is an insurance agent and a woman labelled as a witch by the entire town. It makes you feel you are back into an era where single women who were not very social were termed so. Add to this missing children and the wrath of the residents. You can well imagine the harrowing experience the so-called 'witch' might be going through.

Larry has a flair to bring in twists and turns when they are least expected. But the best part is that they are never out of place. It is only a bit of mismatch due to slow tempo of the story line. However, this does not take away the fact that the story conjures up lovely visual imageries. There is an air of mystery and spookiness which acts as a magnet for the reader. If only the pace had been a bit more faster, the story would have not lost a star. Maybe patience on part of the reader would make it more comfortable to follow.

The protagonist is convincing as he essays the role of a misfit in an alien society. Narrated through his eyes, the other characters have their own flaws and misgivings, thereby adding to the spooky theme. There are ghosts, creepy images, but then, you need to read this to understand the nuances.

To sum up, I really enjoyed every bit of this book, though it did take me some time to get used to the slow pace. But the concept, the eeriness and the changing characters kept me hooked to it.

P.S- Read this book in July...but it has made me ponder what if there was an October 32!!! Thanks Larry.