Shorts: Near Death In The Gila National Forest 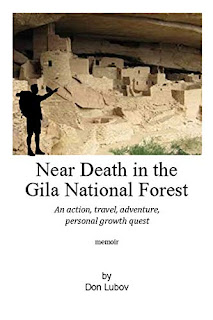 It’s 1971 and a university art instructor has just been informed that his contract won’t be renewed. His life is spiraling out of control. He decides to set out on a solo hiking trip across the U.S. Two men, offer to pay him $50,000, to set up a drug deal in Mexico. He agrees to do it, with the hopes that he will finally be financially secure.

In 4,500 miles, he encounters a 7-day rock festival in the woods, an invitation to a lynching, Mexican drug dealers, near death in the wilderness, a spiritual awakening and a ride with a Hell’s Angel. His exploration covers homelessness in Haight-Ashbury, an urban, mega-warehouse commune, a bizarre New Year’s Eve and a stabbing in a cheap hotel.

He learns to cope with vigorous hardships of nature and living off the land; hitchhiking and sleeping in strangers’ homes. After the drug deal fails, his designs for a unique energy-efficient building system score him a collaboration with a prestigious, San Francisco architecture firm. He unsuccessfully pairs with financial suitors, only to be disappointed at every turn.

His “Bucky” Fuller approved work is published in “The New Earth Catalog”. This leads to a teaching position at Stanford University. After 1 ½ years at Stanford, a realtor offers to fund his energy-efficient architecture. After one year, this project goes nowhere.

Finally accepting his spiritual awakening, he makes some hard decisions about the direction of his life and career. 4 ½ years after he began this journey, he returns to New York, to kick-start his former career in fine arts and to find his true love.

His recent awakening makes his journey bigger than just one person. His spiritual awakening will lead to 47 years (and counting) of first-hand knowledge, to share with others and to be of service to them. Unconditional love is all there is…all that matters. As for death, once accepted, it’s no longer a problem, but simply a fact of life.
Book Tours Bookstagram Shorts Spotlight