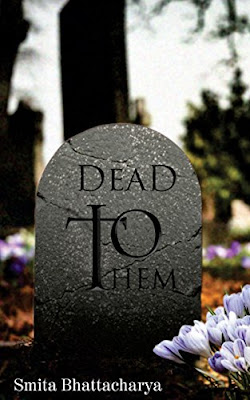 This was Smita's second story that I have read and is one of those stories that I had to read at one go. Yes, the beginning really ot me hooked on. To add on, it is not a sequel and has a standing of its own.

The plot revolves around a young woman and her identity. I know it sounds weird but I cannot reveal more lest I give away the story. Suffice to say the story concept per se will not disappoint you. Read it at least once for sure.

The language is simple and writing style does try to keep the reader guessing about what will happen next. I say try because I really wish the change in point of views were smoother. No doubt they added the required twist. However, I personally felt, there was a subtle sudden change from the POV (point of view) of the protagonist to that of the others. The story does evoke imageries but the high point is that it does entice you to put on your thinking cap. The concept is ideal for a visual representation for sure.

The characters had equal importance and it is only towards the end that the protagonist gets the opportunity to outshine the others. There were a lot of similarities between characters. Though I will not deny the existence of peculiar characteristic features specific to a particular character, yet I feel they were a bit subtle. Its like I neither fell in love with any character nor hated it. Detailed and stronger characterisation would have enhanced the concept.

What really intrigued me was the title. When I mulled over it I realised it had lot of connotations. It kind of marked a new beginning, a sign for ending something or cutting away the root. It seemed a shoutout to detractors and haters about their insignificance. And if I have to judge the overall story whether it did justice to the title, I must admit, it did, to a great extent.

To sum up, the story is superb. There is a cliffhanger in the end so I am hoping that the story has a sequel. Maybe then readers would get more clarity. It is not meant for kids but for young adults, definitely yes. Do read it if your genre is suspense and thriller.

P.S - Thank you Smita for a superb piece of writing. This review is my honest opinion after reading the story.
Book Review